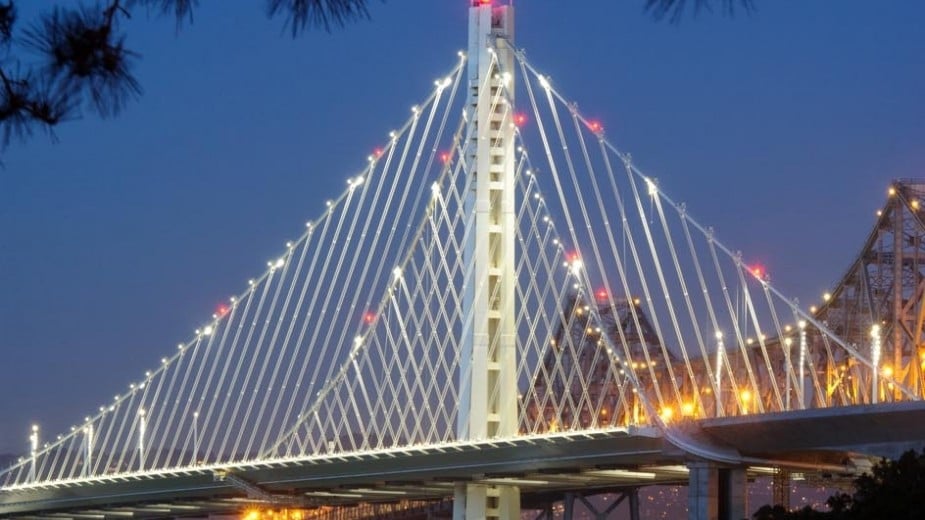 In just a few days the San Francisco Bay Area will have a brand new symbol of engineering brilliance and it comes not a moment too soon. If you are like me, scenes from the 1989 Loma Prieta earthquake still seem fresh in the mind. Perhaps this is because my Dad was watching the world series with the family on the television safely in Houston, Texas as the quake struck and being from the Bay Area my family was directly affected by the tragedy. When I reflect upon these memories I find that no image is more burned into my mind than the collapsed section of the Bay Bridge. The thought of drivers plunging between the decks or being crushed seems inescapable when viewing the pictures from the fateful day now just shy of its 25th anniversary. Having relocated to the Bay Area as an adult these memories are regularly revived; every time I cross the eastern span of the bay bridge I feel the weight of chance in my mind considering all the likely and unlikely scenarios of disaster.

It may come as no surprise that I am a big fan of the new Eastern span of the Bay Bridge with its attractive Skyway elegantly rising from Oakland or the Oakland Touchdown (OTD) as it is known to the single Self Anchored Suspension (SAS) tower, the largest in the world. The Western span of the Bay Bridge which was completed in 1936 is a suspension bridge and because of this it is considered far safer in a large earthquake than the truss architecture of the soon to be replaced span (permanent retrofitting was done on the Western span previously).

The bridge while a sight to behold is more than just a multi-billion dollar work of minimalist elegance – this structure boasts some of the most progressive building techniques including several never used in bridge construction on this scale. To head off catastrophic structural failure a number of elements will intentionally deform allowing bridge structures to move instead of buckle under the unimaginable forces at play during a high-magnitude seismic event.

Transitioning riders from the Oakland toll plaza the Oakland Touchdown or OTD required rerouting traffic to allow for construction including building a new electrical substation. Significant relocation of underground utilities proved necessary due to proximity to the OTD foundation site requiring new submarine power cables to replace the old ones that had served electricity to Yerba Buena Island. Cutting edge seismic technology employed hinge pipe beams to absorb seismic energy with replaceable fuses inside the beams bearing the brunt of quake induced forces.

Some environmental preservation efforts are noted by Caltrans with concern for wetland wildlife and marine habitats. Cranes and other heavy equipment were held out of water by trestle structures to prevent dredging of mud. However, environmental impact and feedback from local residents has not been reviewed to independently support the claim that construction strategies actually preserved the environment to any significant degree.

The Skyway is a 1.2 mile parallel deck gently carrying riders to the height of the SAS beyond and will be the first Bay Area bridge to provide an unobstructed 360 degree view. Parallel decks carrying 5 lanes of traffic per deck with shoulders of 10 foot widths convey traffic along the expansive section of the new bridge held aloft by 14 sets of piers each constructed with 160 rebar and concrete-filled steel piles each 8.5 feet in diameter. Gigantic concrete sections were fabricated in Stockton, Ca and floated by barge to the construction site and are the largest casts of their kind ever struck.

The most noticeable structure of the bridge span is the SAS or Self-Anchored Suspension which is the primary superstructure between the Skyway and the transition to the Yerba Buena complex. Asymmetrical in design the SAS tower had to be pulled in one direction during construction to compensate and is 2,047 feet in length making it the longest in the world. The main cable is a single unbroken line about 1 mile in length and was looped from one end and around the other before heading through the tower and back again.

The final section of the new bridge is the Yerba Buena Island Transition Structure or YBITS as it is called and converts the side by side deck traffic with the vertical deck format of the Tunnel connecting riders with the now permanently retrofitted western span. Bridge building has always been associated with fatalities, but in one tragic case a Hayward man, Tahri Sheikh Fakhar was driving a truck full of pears that jumped the 3-foot railing and plunged 200 feet to his death. Anyone travelling remotely near this section of the Bay Bridge is inundated with speed signs and warnings of the since modified S-curve. Having driven through this section several times even at the recommended speed the S-curve is noticeably acute. Many sets of small speed bumps sit in clusters and in comparison to normal speed bumps in parking lots can only be described as ‘significant’ especially to a non-regular driver whose concentration has drifted. 🙂

The primary challenge in constructing the YBITS has been in keeping the traffic flow continuous while deploying large sections of the project. The aforementioned S-curved being the primary mechanism for rerouting traffic.

No mega-engineering project is complete without scandal, whether it’s foreign steel or questionable welding the new Bay Bridge has suffered its fair share of unwanted scrutiny. Here is a brief rundown of some of the issues that have arisen during construction.

Whatever the outcomes of the controversies surrounding the bridge construction one thing is clear – it will be safer in all respects over the existing span. The new span of the Bay Bridge will last for decades upon decades to come serving hundreds of thousands of commuters each day. The engineering bar has been set high from this series of projects taking years in planning and construction and I for one am excited and thrilled at the prospects of what can only be described the newest icon of American Engineering.

1 thought on “Raising the Bar: Engineering the New East Span of the Bay Bridge”