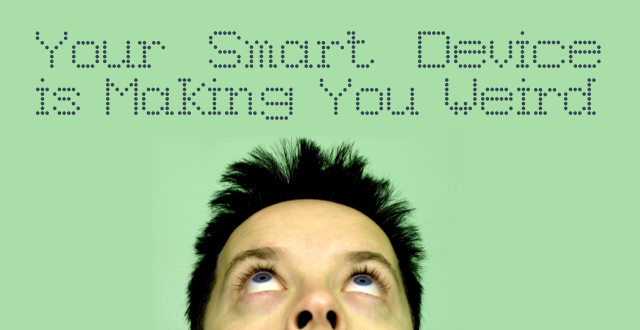 Your Smart Device is Making You Weird – A series where ScienceBlog.com blogger joebowman takes a look at new technologies and the ways they affect people and society.

In a world where continually evolving technology is changing the way people interact with the digital and physical worlds, the first genuine hands-free technology may be just around the corner. Rest assured that new advancements in smart device manipulation will do much to make people seem even weirder than today.

The hand is quicker than the eye, but the eye is way cooler

If you follow the geeks of Silicon Valley then you may have noticed Google co-founder, Sergi Brin sporting a stylish and decidedly futuristic looking eye piece at recent events. A sly introduction for one of Google’s most anticipated technologies, Project Glass promises to liberate Humans from the tyranny of using one’s own hands. Calling it, ‘Augmented Reality’, this latest effort by Google hints at a future where buttons and switches become hilarious vestiges of more primitive eras in Human history.

While Google is primarily known for its search engine dominance it is actually advertising that drives corporate profits. In fact, only about 1,100 employees in the AdWords division of Google generates revenue for the worldwide operation of 20k employees. So, at the end of the day, and no matter how hard they try it is the advertising business that Google’s namesake symbolizes. Industry insiders quickly point to a dystopian future where ads and offers are stuck in the eye, literally.

Google was quick to point out that there will be no advertisements on the new devices. Yet, for a company with the motto, ‘don’t be evil’ and a technology that hasn’t doesn’t hit developers’ hot little hands until 2013, much will certainly change between now and when these smart devices are available for consumers.

No glove, no love

Not to be outdone by its own self, Google has recently patented a glove-like device that integrates sensors and control points that may open up even more possibilities for changing the way people interact with technology. With the potential to put cameras at your fingertips, again literally, Google Glove may make the average user an explorer of all types of crevasses. Imagine a world where people can peer into any orifice accessible to a finger or a world where American Sign Language becomes a common way to physically dictate text. Perhaps this is where transdermal drugs and smart device technology finally grants the Pharmaceutical industry unfettered access to your bloodstream over the Internet.

Predicting the ill effects of technologies still unrealized is easy, finding real world applications that will enhance productivity is another story. These technologies may be years away in terms of augmenting our lives in a meaningful way but they speak volumes about where smart device technology is headed. As new advances change the way people perceive and interact with the world the more old customs and courtesies fall away.

In previous editions of Your Smart Device is Making You Weird, I talked about a family out at dinner, happily sitting in silence as each was engrossed by their smart devices, now mix in some Augmented Reality eyepieces and glove control gear and you have a scene that can only be described as ‘weird’.

If you are like many people, you are already thinking how ridiculous these upcoming advances in technology seem. You may be right, but remember that you said the same thing about that smart phone charging on your desk and the Bluetooth headset in your ear.