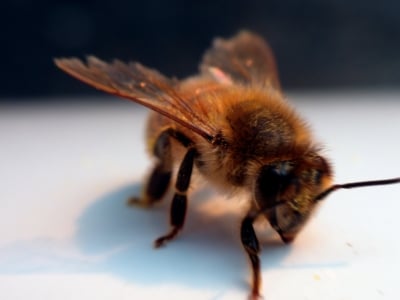 Since the 1990’s over a third of all raised bees have disappeared in what scientists have dubbed, ‘Colony Collapse Disorder‘ or CCD.  A mysterious condition where bee colonies are rapidly decimated by as yet unknown causative agents. Over the years theories have emerged blaming various culprits such as parasitic mites and the use of applied antibiotics.

Recent research from the United States Department of Agriculture’s Bee Research Laboratory and Penn State University found links between the neonicotinoid insecticide clothianidin and CCD.  Alarmingly, research has also showed that bees were affected at even extremely low levels of exposure.

If indeed we have discovered a primary agent behind Colony Collapse we must urge regulatory bodies along with commercial manufacturers to restrict use and availability of this class of chemicals.

Bees in CCD colonies had higher pathogen loads and were co-infected with a greater number of pathogens than control populations, suggesting either an increased exposure to pathogens or a reduced resistance of bees toward pathogens.

Therefore, growers employing Bees for pollination are urged to immediately halt the use of neonicotinoid-based pesticides to reduce the impact on Bee populations.  Bans in Italy in 2009 reduced dramatically reduced losses of Bees for the first time since 1999 as reported by Roberta Cruger on her blog, lovethehoneybees.blogspot.com.

At the end of the day, where industry is concerned change is slow if non-existent in the face of environmental concerns. Yet the fact remains: utilizing Bees for pollination while simultaneously employing chemicals that decimate their populations is illogical and will likely be judged by future generations as criminal.